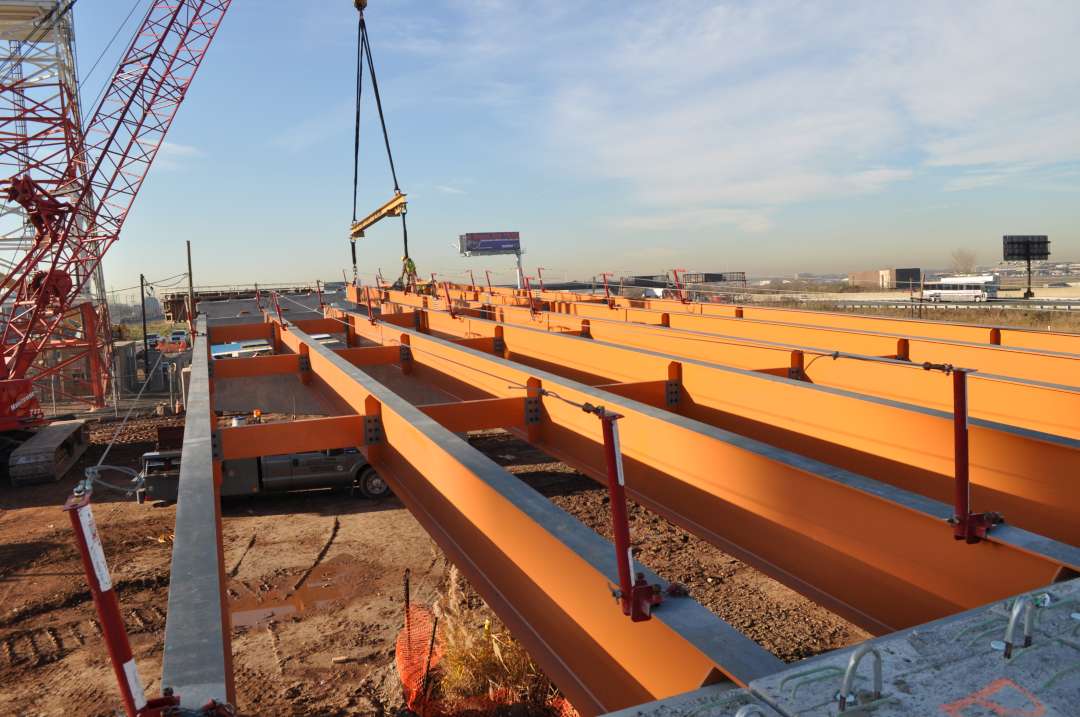 The Port Newark Flyover bridge project was a unique project with many different types of construction activities compressed into a relatively compact area. The project is mainly a “U” shape bridge spanning over Corbin Street and Ports America, Inc.’s train tracks which are operated by Conrail.

The bridge has a composite deck design with a concrete deck over steel girders for thirteen spans, and concrete decks over precast, pre-stressed and post tensioned concrete slab beams for two spans. The steel girders are significantly curved because of the bridge’s half circle shape with a very tight, 169 ft radius. The structural steel is supported by 46 ft wide cast in place concrete hammer head pier caps and 84” diameter pier columns. Thirteen pier columns are supported by 96” diameter drilled shafts and one pier and the two abutments are supported by 72” drilled shafts. The shafts are up to eighty feet deep including rock sockets varying from 15 ft to 20 ft in depth.

The west approach includes a two foot thick concrete slab over 16” diameter concrete filled steel pipe piles and cast in place retaining walls on the sides. The East Approach is supported by a load transfer mat, which consists of I-12 fill between several layers of high strength geo-grid, on 1,100 timber piles which are 45 ft to 55 ft long. The approach embankment is constructed of I-12 fill supported by over one thousand T-wall panels on the sides.

This project was located in a very densely populated, high traffic environment, next to the Newark International Airport and the NJ Turnpike, over the Conrail and PNCT train tracks, and Corbin Street, and around one of the Newark Airport’s ground radars. Due to these surroundings the construction had to proceed in a very tight and controlled environment with significant coordination  between the stakeholders such as the owner PANYNJ, their tenants such as Port Newark Container Terminal and Cargill, Conrail, and the Federal Aviation Administration.